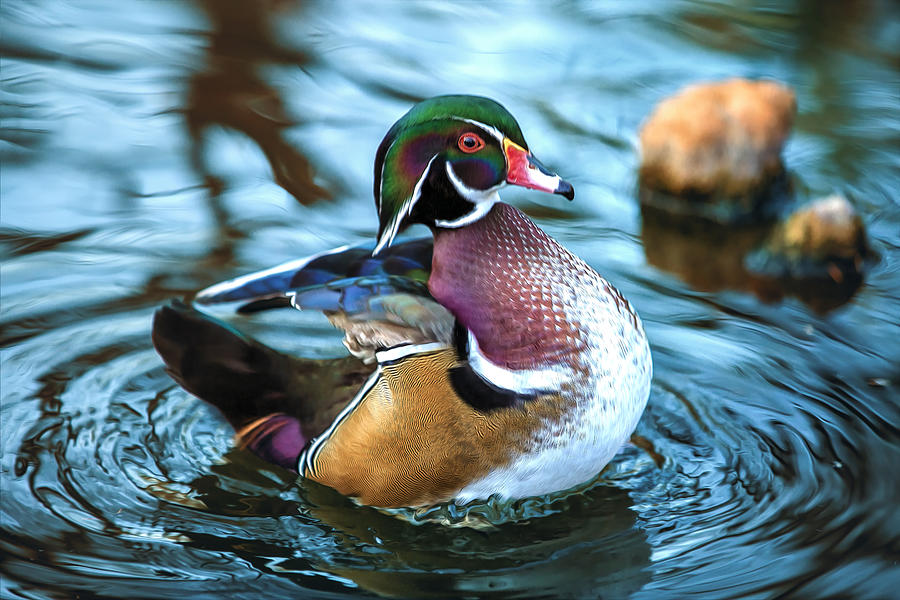 A male Wood Duck rocks in the water mimicking a rocking horse, putting on a vibrant show.

Wood Ducks forage in the water by taking food from the surface and up-ending to reach food underneath. They also graze on the land. Pairs form on the wintering grounds, and males attract females by showing off their brightly colored plumage. Females demonstrate strong fidelity to the sites where they hatched (philopatry), and they lead their mates back to those sites in the spring.

Male Wood Ducks are flamboyant in breeding plumage, practically unmistakable with their brightly colored chestnut and yellow bodies, green droop-crested heads, bright red bills, and bold white barring on their faces and bodies. Females are drabber, with a subtle iridescence on overall grayish-brown bodies, spotted flanks, and a white teardrop surrounding each eye. Juveniles appear similar to females, as do non-breeding males in eclipse plumage (from June to September), although they have the red bill and white facial markings.

CONGRATULATIONS! This image is now featured on the Homepage of 'What's in it for you: Sensational Animal Images'. You are invited to visit the group and promote this image on the discussion thread. If you admire other artists' work, you are invited to post your favorite artists' images' in the indicated discussion thread. Bravo for this marvelous art.

'Well Bill, I always knew that I'd make the front page somewhere. Now don't forget next time to bring me the crumbs. You owe me!'.

Love the vivid colors of this work;) v