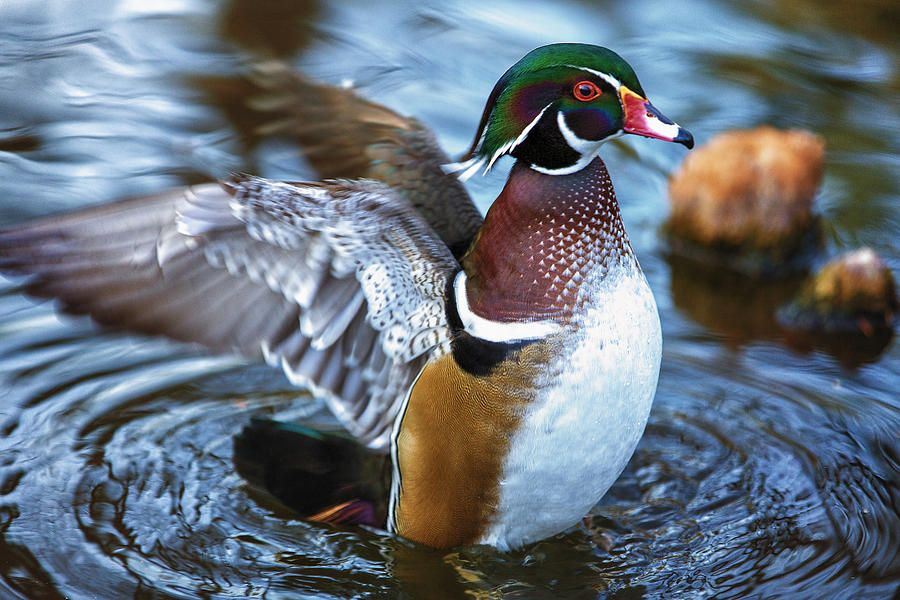 The Wood Duck or Carolina Duck is a species of duck found in North America. It is one of the most colorful North American waterfowl. Males are iridescent chestnut and green, with ornate patterns on nearly every feather; the elegant females have a distinctive profile and delicate white pattern around the eye. These birds live in wooded swamps, where they nest in holes in trees or in nest boxes put up around lake margins. They are one of the few duck species equipped with strong claws that can grip bark and perch on branches.

In good light, males have a glossy green head cut with white stripes, a chestnut breast, and buffy sides. In the low or harsh light, they'll look dark overall with paler sides. Females are gray-brown with white-speckled breasts. In eclipse plumage (late summer), males lose their pale sides and bold stripes but retain their bright eyes and bill.

Wood ducks breed across most of the central and eastern United States, southeastern Canada, and along the Pacific coast from California to British Columbia. The highest breeding densities occur in the Mississippi Alluvial Valley. In recent decades, the breeding range has expanded westward into the Great Plains region following the development of wooded riparian corridors. Wood ducks prefer riparian habitats, wooded swamps, and freshwater marshes.

Congratulations, your work is Featured in "A Birding Group - Wings" I invite you to place it in the group's "2020-2021 Featured Image Archive" Discussion!! L/Tweet

Congratulations, your work is Featured in "Coastal Water Birds-Shore Birds" I invite you to place it in the group's "2020 Featured Image Archive" Discussion!! L/Tweet

Bill, your "Incoming Woody" seemed about to settle in for awhile, but while scrolling further I was surprised to discover him snapped in the split-second of take-off; such perfect timing! Thanks for adding my "Rittenhouse...Snow" to you group.

what a beautiful capture... most excellent! vf

Nicely done! Congrats on the sale.

Congratulations on your sale!

Beautiful! What a great capture!

Thanks so much for all the kind comments everyone!

Beautiful photograph of a Wood Duck! I love the capture in the action, the colors, and detail of this shot!