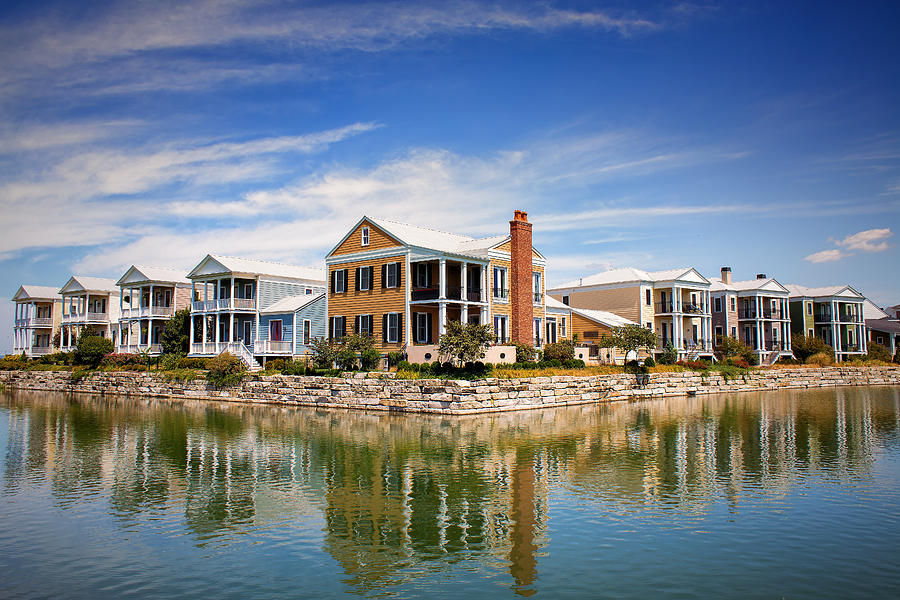 The main focus of the New Town at St. Charles project was the creation of lakes and canals primarily needed to contain 75 acres of storm runoff. However, these lakes quickly became the strong and identifiable character of New Town St. Charles by providing it with a dramatic and active waterfront. Four neighborhoods will surround a dense, island-like town center neighborhood connected by greens and plazas and entirely surrounded by water.

New Town is located in northeastern St. Charles County, approximately 18 miles from the confluence of the Missouri and Mississippi Rivers. New Town was built on a small natural ridge and is surrounded by low farmland and wetland. The area is home to many species of ducks, cranes, geese, snakes, deer, fish, hawks, and eagles. The Great Rivers Greenway District and Katy Trail State Park both run close by New Town and provide residents access to wildlife.

What a beautiful place to live nice reflections voted CFC#15

I love the reflection.

Appreciate your description, Bill. Great perspective and clarity in this image! Really like the textures in the building details and the almost ghostlike reflections caused by the ripples in the water. Congrats on all the features...well deserved! Vote and faved.

Very nice shot Bill love the colors and the reflections!

Love the composition and the reflections. Great image. v

This is a really clean shot. I love the angle of the houses against the water.

Lovely view architectual images and the reflections add color and a softness that is different then the hard surfaced buildings. Variety of blues add dimension and interest above and below. v

Bill, fantastic photo so detail and so clear I love the way I can see the ripples in the water and how the whole row of houses reflect with that blue sky into the water that surrounds the complex. Such a great and clear shot how you even picked up so clear the bricks lying right against the water. Fantastic photo,, Voted and FB