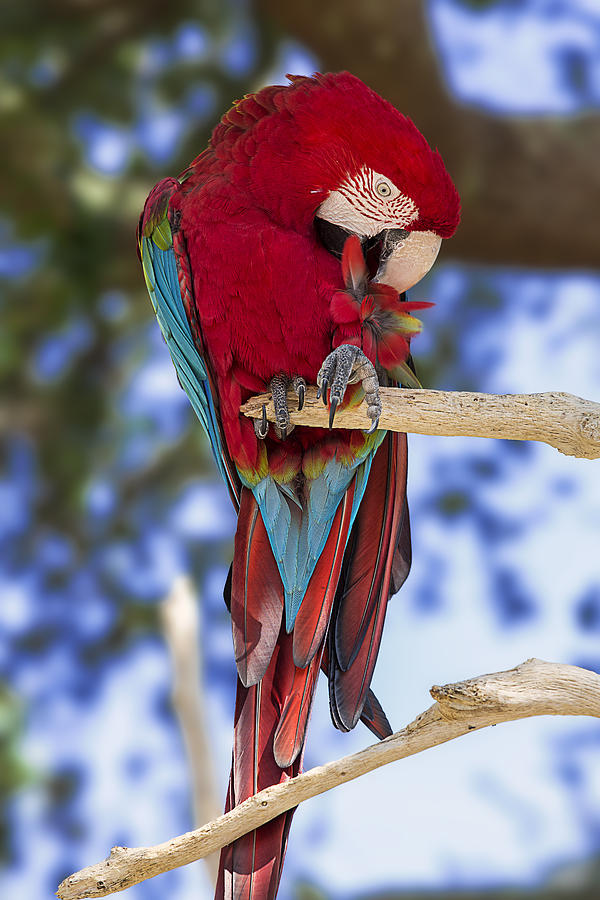 The Green-winged Macaw, also known as the Red-and-green Macaw, is a large mostly-red macaw of the Ara genus. This is the largest of the Ara genus, widespread in the forests and woodlands of northern and central South America.

The green-winged macaw is a large parrot covered with mostly red plumage. The wing and tail feathers are blue and green, hence its name. This macaw has a white, naked face, striped with small red feathers. The beak is strongly hooked and the feet are zygodactylous (2 toes that point forward and 2 toes that point backward).

Macaws are very messy eaters - their extremely strong beaks are perfectly adapted for eating all sorts of nuts and seeds, as seen in their ability to crack open incredibly hard-shelled nuts (such as Brazil nuts) with ease. In the course of daily feeding, macaws allow plenty of seeds (while eating, as well as in their droppings) to fall to the forest floor, thus regenerating much of the forest growth.

Largely a forest-dwelling species, green-winged macaws, along with many of their parrot relatives, are under pressure from deforestation and human population growth.

What a wonderful looking presentation!! v/f/t

Voted and I love this - so bright and cheerful!