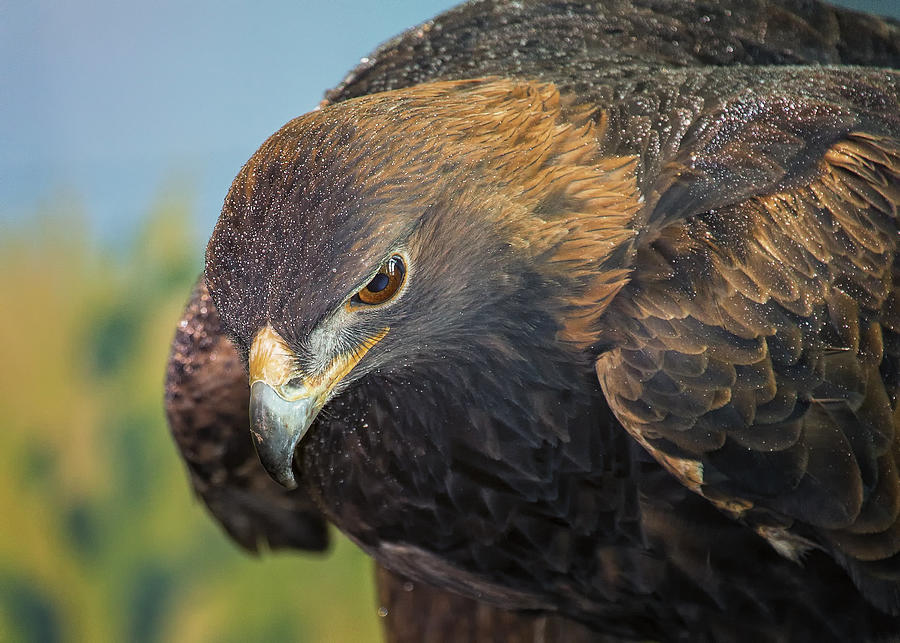 Meet Donald. Donald is the first Golden Eagle Ambassador and we are proud to have both eagle species that are native to North America represented at the National Eagle Center.

Donald came to the National Eagle Center after being treated at the California Raptor Center. He had been hit by a car near the town of Placerville, CA, breaking his right wing in two places. Donald is no longer able to sustain flight.

We are unsure of Donald's exact age. His fully adult plumage suggests he was at least five years of age when he was injured, so he hatched sometime before 2002.

Donald arrived at the National Eagle Center on January 8, 2008, and was named for the Donald Weesner Charitable Trust, whose generous donation made his arrival and training possible. During his first year, he continued to be bashful among the other eagles and with guests. He often spent the day looking only at the murals with quick glances toward people. Today, Donald often displays quite relaxed postures in the mews.

Golden eagles can be found around the world in the northern hemisphere, and Donald's presence at the National Eagle Center has ignited a new interest in understanding the life and habitat of golden eagles.

Congratulations on being featured in the Fine Art America Group "Images That Excite You!"

Fantastic shot Bill what a wonderful close up portrait. Tweet,f/l for sure

Just had to tell you that this is one of my ... Top Five FAVORITES ... of all images seen in groups today..... Like the subject, technique, composition, and color... Today it was Published in the Internet publication ARTISTS NEWS.... Anyone can Just Highlight this link ---- http://bit.ly/RVPlpf - Use Ctl-C to copy and Ctl-V ---- to put it into the Browser Address, to view the publication. You can then, Tweet, FB, and email, etc a copy of the publication, to just anyone you feel would be interested. Happy Promoting! :-)

Wonderful shot of a beautiful bird. Thank you Bill for your visit and comment!