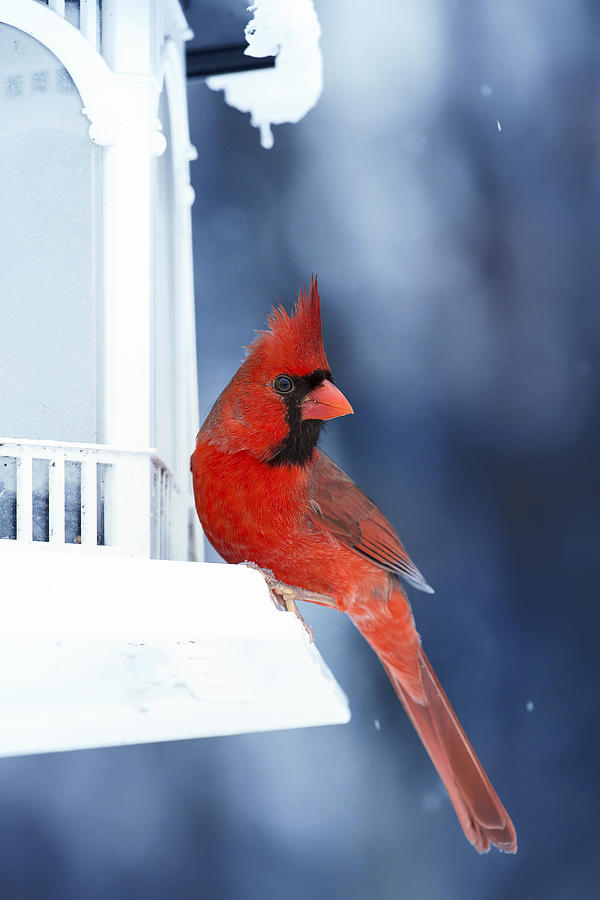 A Male Northern Cardinals perched on a white feeder in the midst of a cold winter snowstorm. The vibrant Cardinal red contrast against the chilly blues and white snow. The Northern Cardinal is a North American bird in the genus Cardinalis, it is also known colloquially as the redbird or common cardinal.

The Northern Cardinal or "Redbird" is probably one of the most popular visitors to backyard bird feeders. Its range extends over most of the eastern USA, parts of extreme southeastern Canada, and south through Mexico to Belize. It has also been introduced to Hawaii. Its variable call, a loud "cheer cheer cheer" or "purty purty purty," is sung by both sexes and can be heard year-round. Cardinals are nonmigratory, but some movement does occur in the later summer and fall.

The male Northern Cardinal is perhaps responsible for getting more people to open up a field guide than any other bird. They're a perfect combination of familiarity, conspicuousness, and style: a shade of red you can't take your eyes off. Even the brown females sport a sharp crest and warm red accents. Cardinals don't migrate and they don't molt into a dull plumage, so they're still breathtaking in winter's snowy backyards. In summer, their sweet whistles are one of the first sounds of the morning.

Thanks so much Susan!